Flooding can cause significant damage, so to protect our community we actively manage flood prone lands to reduce the impact.

Albury's location on the banks of the Murray River and within its catchment areas means the city is vulnerable to flooding - anything from overflowing drains to inundation.

Together with the NSW Government, through the Department of Planning, Industry and Environment and the State Emergency Service (SES), we carry out studies to understand flood risk, keep the community informed about flooding, support emergency management planning, and examine options to manage flood risk. We also actively take flooding into account when controlling the development of flood-prone land, and in carrying out management actions including the investigation, design, construction, operation and maintenance of flood mitigation works.

The NSW Government Floodplain Development Manual guides us in managing flood risk in our community. The manual details the actions required to assist us in meeting our obligations under the Flood Prone Land Policy, which is to plan and manage flood prone land in accordance with its flood exposure.

To manage flood risk in our community and meet our obligations, we've undertaken and developed the Floodplain Risk Management Study and Plan.

We have carried out flood studies for the following areas:

The flood study area includes Bungambrawatha Creek, West Albury, South Albury and Lavington Drains. It contains a large section of the Albury urban area. Localised flooding occurs at several locations in the area. The most recent events occurred in February 2001 and September 2005.

Bungambrawatha Creek is the largest creek in the area, running north to south through the town centre and discharging into the Murray River near the Botanic Gardens. During severe storms, the creek can overflow and inundate houses. Flooding can be worse if culverts on the creek are blocked or if the Murray River also has a high water level.

West Albury, South Albury and Lavington Drains are also liable to significant flooding. West Albury receives runoff from the wooded area to its north and conveys the flows through artificial channels. When the capacity of these channels is exceeded, properties in the area may be inundated.

The Lavington Drains area drains runoff from a relatively small catchment; however, the drainage can be insufficient in large storms, leading to flooding of properties and roads.

South Albury is subject to local catchment flooding as well as inundation from the Murray River; however, it is partially protected by a levee.

The Thurgoona catchment is located two kilometres east of Albury town centre and contains three drainage branches, all of which discharge into the Murray River. The catchment contains part of the suburb of Thurgoona as well as the airport and undeveloped pastoral land.

The primary issues identified in the flood study are potential flooding of roads and overland flow in the airport area.

Records of flooding in the area are relatively limited, probably due to the relatively low level of development in the catchment. A severe flood occurred in January 1974 and there was a minor flood in August 1983.

The Murray River lies on the south boundary of the LGA. The Murray floods as a result of high rainfall over its catchment (largely upstream of the Hume Dam). The most recent major floods occurred in 1974 and 1975.

This study and plan is an important tool in managing flood risk in our community and in meeting our obligations under the NSW Government Flood Prone Land Policy. 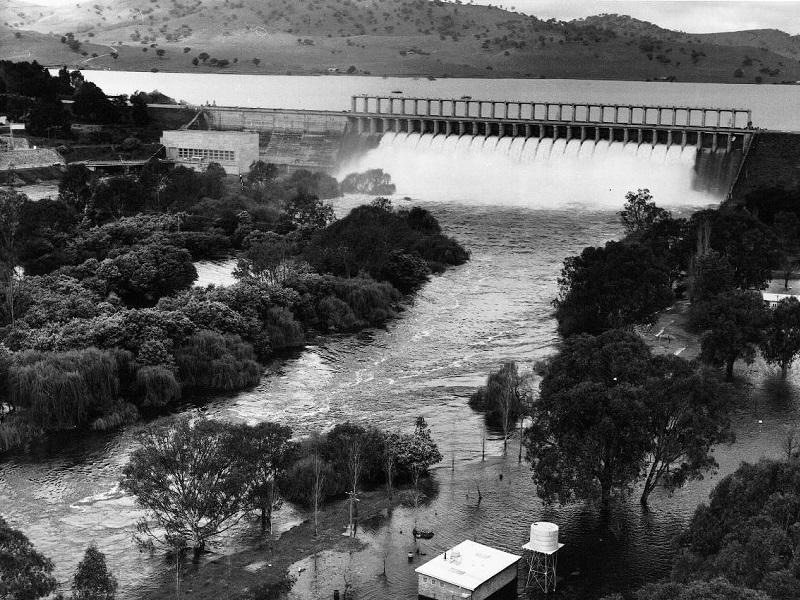